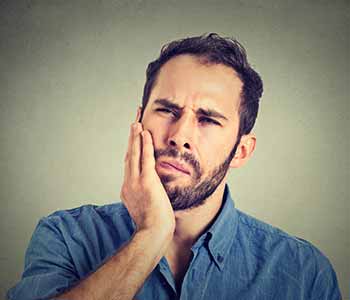 Visit TMJ-TMD Page to learn more or
Contact Us

TMJ disorders are a set of complex conditions that are the result of issues affecting the jaws, jaw joints, and the surrounding muscles. Studies have found that nearly 75 percent of adults in America suffer from one or more symptoms related to temporomandibular joint disorder.

It was originally thought that the condition was caused by misaligned teeth or a poorly positioned jaw, and the common treatment was tooth restoration and orthodontic treatment. However, studies found that malocclusion was rarely the cause of facial pain and other TMJ disorder symptoms.

Today, temporomandibular joint disorders are thought to be multifactorial, with cognitive, emotional, social, environmental, behavioral, and biologic factors influencing the development of the symptoms associated with the condition.

National Institute of Dental and Craniofacial Research scientists state that in treating TMJ disorders, often, less is best. Many people have symptoms come and go on their own. It is estimated that only five to ten percent of those demonstrating symptoms actually require treatment.

Some of the recognized physical causes of the condition include, but are not limited to:

A neuromuscular problem affecting the muscles used when chewing is considered the most common TMJ disorder. Myofascial pain disorder is characterized by an aching, dull pain that is centered in or around the ears, and it can radiate down the neck or to the back or side of the head.

Some of the common signs of this disorder include popping or clicking noises when moving the jaw, tender muscles in the jaw, or problems opening and closing the mouth. Simple movements such as yawning, talking, or chewing can worsen symptoms. Habits such as chewing gum, biting fingernails, tooth grinding, and clenching the jaw can aggravate the condition.

An accurate diagnosis is crucial to finding relief

Dr. Leo Arellano uses patient history, physical evaluation, diagnostic imaging, and an in-depth discussion to determine the cause of the condition in order to plan effective treatment. Changes in diet and habits, warm compresses, and an oral appliance, among other actions may be included in the treatment plan. Call 415-881-4343 to schedule an appointment today.

Back to TMJ-TMD Page

I recently had a dental implant procedure performed by Dr. Arellano.
I could not be more pleased with the results. From the initial consultation to insertion of the implants, Dr. Arellano made this entire procedure understandable, easy, & pain-free !!
Highly recommend this professional dentist.