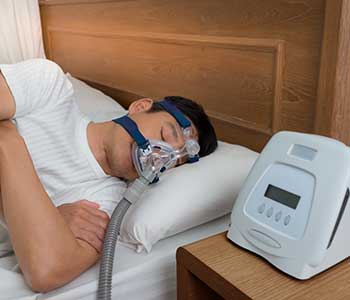 According to the Centers for Disease Control and Prevention (CDC), insufficient sleep is a public health epidemic. Lack of sleep has been linked to industrial disasters, motor vehicle wrecks, and other serious occupational errors, such as in the field of medicine. Additionally, insufficient sleep has been linked to serious conditions such as increased mortality, cancer, obesity, depression, diabetes, high blood pressure, lack of productivity, and a reduced quality of life. Insufficient sleep can be caused by a number of things, but sleep disorders such as obstructive sleep apnea play a significant role. Fortunately, people in San Francisco can turn to Dr. Leo Arellano for relief from this extremely serious condition.

What is sleep apnea?

OSA (obstructive sleep apnea) is a condition in which an individual stops breathing while sleeping; there can be hundreds of these episodes per night. These pauses in breathing are known as apneas or apneic events. The word apnea (Gk, a – “absence of” + pnoē – “breathing”) literally means absence of breathing. Absence of airflow for 10 seconds or longer is considered an apneic event.

An apneic event occurs as follows:

The common symptoms of this disorder include morning headaches and dry mouth, excessive daytime fatigue or sleepiness, irritability, depression, impaired mental function, and loud interrupted snoring. OSA can be caused by a number of conditions including:

A CPAP (Continuous Positive Airflow Pressure) device is commonly prescribed to treat moderate to severe obstructive sleep apnea. This treatment requires the patient to wear a nose mask that delivers a steady stream of air to prevent the airway from collapsing. Although CPAP is effective, patient compliance is low due to discomfort and inconvenience.

A comfortable oral appliance is a comfortable, convenient, effective alternative to CPAP for patients with mild to moderate OSA and for those who cannot tolerate CPAP. At times it can be effective in even severe OSA. There are several different styles of dental devices available, and
Dr. Arellano chooses the appropriate type for the individual situation.

The doctor and his team use their skills, training, and experience to help San Francisco sleep better. Call 415-881-4343 today to schedule a consultation.

Back to Snoring And Sleep Apnea Page

We’ve gone to Dr Arellano for many years and have never been disappointed with any of the work he’s done. Recently my husband broke a tooth and Leo got him in and had the tooth repaired within a few short hours. Service like that is very hard to finds these days. His office staff is fantastic. Nice people you are always glad to see. I would highly recommend Dr Arellano to anyone who is searching for an honest, competent, well trained dentist.