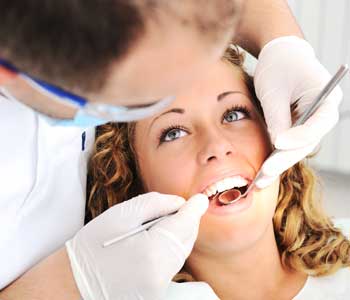 f you have ever noticed bleeding gums after brushing, you are not alone. Many people spot a little ‘pink in the sink’ and assume that it is normal, or an indication that they brushed with too much pressure. However, bleeding gums are not normal. In fact, this is one of the early symptoms of gum disease. Other early signs include gums that are red or inflamed and persistent bad breath. A minimally invasive treatment for periodontal disease is now available in San Francisco.

Gum disease is a common infection, but one that can cause irreversible damage if not addressed early. Unfortunately, symptoms of gum disease are often overlooked, leading to the condition not being treated until it has progressed.

We are here to help Call us at 415-881-4343 or Schedule an Appointment today
Treatment for periodontal disease can be invasive and complex, often requiring surgery for recession of gums. However, San Francisco dentist, Dr. Leo Arellano, is able to reposition gum tissue without using a scalpel. With a new treatment method known as Pinhole Surgical Technique, Dr. Arellano uses a small needle to create a hole in the gum. With special tools, he gently pulls the gum back into its proper position, with minimal side effects such as pain, bleeding, and inflammation.

Back to Pinhole Surgical Technique Page

We’ve gone to Dr Arellano for many years and have never been disappointed with any of the work he’s done. Recently my husband broke a tooth and Leo got him in and had the tooth repaired within a few short hours. Service like that is very hard to finds these days. His office staff is fantastic. Nice people you are always glad to see. I would highly recommend Dr Arellano to anyone who is searching for an honest, competent, well trained dentist.