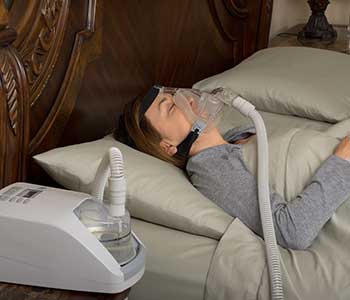 It is estimated that more than 22 million Americans suffer from the debilitation and life shortening effects of sleep apnea. Fortunately, help for this serious condition may be as close as the dentist’s office. Dental therapy has had a role in managing obstructive sleep apnea since it was discovered that appliances used to enhance craniofacial development were found to help open the airway. Dr. Leo Arellano and his skilled team have played a large role in helping many people in San Francisco, Daly City, and the neighboring areas, who are suffering from obstructive sleep apnea to get the restorative sleep they need.

Air passes through the upper airway (mouth, nose, and throat) on its way to the lungs. The soft area at the back of the throat has a tendency to collapse inward when a person breathes, but the muscles dilate (widen) keeping the airway open. Abnormalities or interference with this process causes air turbulence, and in some cases, the tissues collapse, blocking the airway temporarily, causing apnea. Five or more of these episodes per hour of sleep is considered obstructive sleep apnea.

Although there are many causes and risk factors for this condition, some of the most common are:

CPAP (continuous positive airway pressure) is a common and effective treatment for obstructive sleep apnea; however, it has a low compliance rate due to inconvenience and discomfort. Oral appliance therapy, available from Dr. Leo Arellano is patient-friendly and effective for many who suffer from mild to moderate obstructive sleep apnea. The device, similar to a mouth guard, supports the jaw or repositions the tongue to prevent the airway from collapsing. Call 415-881-4343 for an appointment today.

Back to Snoring And Sleep Apnea Page

I’ve been going to Dr. Arellano for about 20 years and I continue because of the excellent care and treatment I get with him and his whole office team. He is both professional and personable.
Recently I had a newer technique of gum surgery/grafting at his office called, “Pinhole Surgical Technique of gum grafting.” I personally found this to be much easier to handle than the other style of gum grafting that I received years ago for the other side of my mouth. That worked, it was where part of my roof of my mouth was cut and surgically sewn onto the gum. However, I much prefer the pinhole technique. It was actually the easiest dental work I’ve had (beyond regular cleaning) It didn’t take too long and it didn’t feel uncomfortable getting it done....